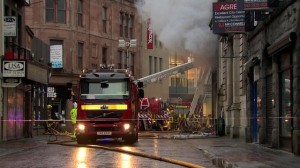 Fire crews at the scene of shop blaze in Rosemary Street, Belfast

INVESTIGATORS are sifting through the debris to pinpoint if a fire at a Belfast City Centre store was accidental or deliberate.

The alarm was raised after flames were by a passing police patrol around 5.10 am on Friday morning

The Northern Ireland Fire and Rescue Service said its crews working in “challenging conditions” to bring it under control.

“The cordon has now been reviewed and members of the public and business owners can now access the arcade.

“At this stage it’s too early to determine the cause of the fire and an investigation will begin in due course.”