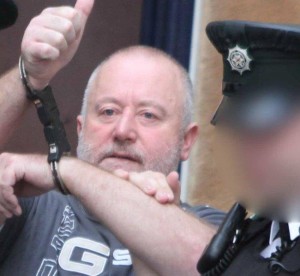 A 58-year-old Derry man has appeared in court charged with murder of Barry McCrory.

Kieran Edward Joseph McLaughlin, unemployed, from Elaghmore Park in Galliagh, was also charged with the possession a shotgun and shotgun cartridges with the intent to endanger life when he appeared at Derry Magistrates Court this morning.

Mr McCrory (35) was shot dead by a lone gunman in a flat in Shipquay Street in the city on 10 October last.

Handcuffed in the dock between two police officers and wearing a dark grey tee-shirt and dark trousers, McLaughlin replied “I confirm, yes” when asked to confirm his identity. He answered “I do” when asked if he understood the charges against him.

PSNI Detective Gary McLaughlin told the court he believed he could connect the accused to the charges.

In reply to defence solicitor, Kevin Casey, Det McLaughlin said there was “no terrorist” connection to the case.

Court papers related to the case show McLaughlin replied “Not guilty, this is a media smear campaign” when the murder charge was put to him.

He answered “not guilty” when charged with possession of a shotgun and cartridges.

He was remanded in custody to appear at the same court via video link on 13 November.

Leaving the dock, McLaughlin spoke briefly to his two daughters who were in the public gallery for the brief hearing.

On arrival, he was cheered by around 12 supporters who shouted “keep your head up.”

As he was led into court, he gave a “thumbs up” sign before raising his arms and shouting “no problem.”

Following his appearance, he again gave the “thumbs up” sign to around 25 applauding supporters as he was driven away in a police vehicle.