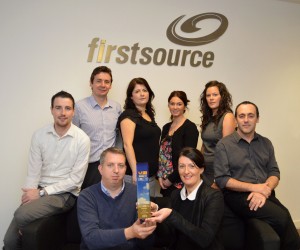 Employees from Firstsource Solutions pick up Business Eye’s Employer of the Year at a recent awards gala. The company,

FIRSTSOURCE Solutions, one of Northern Ireland’s largest private sector employers, is celebrating the seventh anniversary of its operations in Northern Ireland and two major award wins.

Firstsource has just been announced as the Employer of the Year in the Business Eye Awards, as well as Best Outsourced Partnership with BskyB in the European Call Centre & Customer Service Awards.

The latest award for Employer of the Year confirms Firstsource’s position as one of Northern Ireland’s leading employers and the UK’s major outsourced contact centre provider.

This position is consolidated by a triumph at the European Call Centre & Customer Service Awards with the Award of Best Outsourced Partnership with BSkyB, which continues to expand its operations with Firstsource in Belfast and Londonderry.

“We originally planned to create 1,000 new jobs when we started out here seven years ago in two centres. We have since doubled in size with a workforce of over 2,000 and four centres in Derry and Belfast.

“We are delighted to be celebrating our seventh anniversary in Northern Ireland and also to win yet another Employer of the Year award, as well as the European Call Centre & Customer Service award on top of other recent award wins.

“Our Northern Ireland operations have made an enormous contribution to these successes and Northern Ireland continues as an important hub for Firstsource and part of the company’s global strategy.”

Stephanie Wilson added; “At Firstsource we believe in investing in our people. This latest Business Eye award.

“As well as Employer of Choice in the BITC awards and Innovative Employer with The Irish News Awards are a testament to how we nurture our employees and enhance career paths with a range of benefits and flexible working options.”