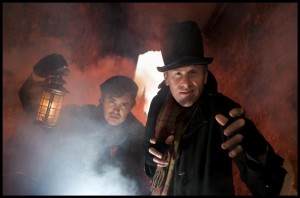 Take a trip this Halloween to Scotland for a frightful experience

ANYONE in Northern Ireland looking for Halloween inspiration this year won’t have to look far with a visit to Scotland, one of the spookiest countries in the world, on their doorstep.

In the run-up to the year of Homecoming Scotland 2014, visitors from Northern Ireland can experience the country that has long been known as the home of myths, legends and tales of the supernatural and discover the story of Ulster-born outlaws, Burke and Hare, the infamous Edinburgh bodysnatchers, amongst others.

A visit to any Scottish town, city or even the most remote part of the country will bring stories of ghosts, ghouls and mysterious events. ’Frightfully’ good experiences that await in Scotland include a visit to some of the most haunted locations in the UK, including Glamis Castle, Forfar, where King Malcolm II was infamously murdered. The castle is well known for its secret rooms that are rumoured to be haunted by a ‘monster’ and a ’Grey Lady’. Another ‘haunted’ location worth visiting is Culloden Moor, near Inverness, the site of the tragic end to the Jacobite Rising of 1745. Here, by the memorial cairn, there has often been seen the dim form of a battle-worn Highlander. It is said that every year, on the battle’s anniversary, war cries can still be heard as both sides battle on in the after world.

In addition to the number of ‘spooky’ locations visitors to Scotland can explore on a visit to Scotland, there are a number of Halloween-themed events worth checking out for 2013. These include:

Screaming hags, eyeless phantoms and a menagerie of unearthly creatures! Join Mostly Ghostly for a coach trip with a difference! The eerie excursion takes you along famously ‘active’ stretches of one of Britain’s most haunted roads – the A75…

Back for 2013, the ever popular ‘Haunted Halloween’ tour will see the bravest explore the famous haunted Blair Street Underground Vaults of Edinburgh by candle-light as well as hear about the sinister and unsavoury past of Edinburgh and its residents. With this late night ghost tour, there will be no holds barred as your guide tells you some of the most chilling tales that Edinburgh has to offer.

The Scottish International Storytelling Festival is a ten-day celebration of oral heritage in its traditional and contemporary contexts that takes place every autumn around Halloween, replacing plastic brooms and dodgy costumes with real experiences and traditional stories.