MAN REUNITED WITH EMERGENCY CREW WHO HELPED SAVE HIS LEG 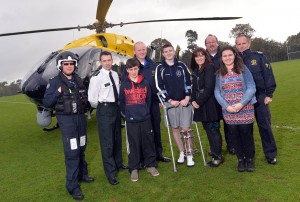 A young man has been reunited with members of the emergency services whose expertise prevented him losing a leg as a result of a car accident earlier this year.

Caolan McCluskey. who was seriously injured collision on the main Derry to Belfast road, met up again with the PSNI Air Support Unit and ambulance personnel whose actions, through working closely together, helped save his leg which was badly injured in this incident.

Police and ambulance crews were quickly on the scene of the collision in the Foreglen area which occurred at 5.10pm on Friday, 15 February in which three men sustained serious injuries.

After paramedics assessed and tended to the casualties, two of them were transferred to hospital by ambulance, however the injuries sustained by Caolan were such that there was the likelihood that could have lost his lower left leg if he did not get to hospital quickly.

It was believed that a transfer by road would have significantly reduced the chances of saving his leg.

At 5.28pm the paramedics requested the assistance of the PSNI Air Support Unit to airlift him to Altnagelvin Hospital.

The helicopter was deployed immediately and flew to the area of the collision.

Conditions at the time made landing the helicopter difficult, but with the expertise of the pilot and his crew they landed at the scene.

Both the police and paramedics worked together to ensure that Caolan was safely transferred to Altnagelvin hospital.

Caolan’s mum, Grainne, thanked everyone involved on the night of Caolan’s accident.

She added: “Without the services of the helicopter, Caolan’s injuries would have been life threatening.”

Chief Inspector Sam Donaldson, Limavady Area Commander said the incident was another case in which the PSNI worked closely with their “partner agencies” to keep people safe.

He added:”Our colleagues from the Northern Ireland Ambulance Service and my officers work closely on a day to day basis.

“In this case, our Air Support Unit were called upon to transfer a young man who had sustained serious injuries as a result of a road traffic collision to hospital .

He concluded: “The fact that Caolan is well on the road to recovery and is here today makes our job worthwhile. I wish Caolan and his family all the best for the future.”

Detective Chief Superintendent Hugh Hume said the PSNI Air Support Unit was a 24/7 resource for throughout Northern Ireland to help prevent and detect crime and to keep people safe.

He added: “We are called upon to help the public in many ways on a day to day basis and I am glad that we were able to help our colleagues in the ambulance service to get Caolan to hospital swiftly and safely.”

John McPoland, Northern Ireland Ambulance Service (NIAS) said the NIAS was “delighted” Caolan and his family had taken the time to meet some of the staff who were involved in his initial treatment.

He added: “We are glad to see that he is recovering well which, in no small part, is due to the teamwork involved from the time the call was made until the time he was operated on.

“Many people were involved in this incident and it should be reassuring to the public of Northern Ireland that, in their time of need, they can call upon a co-ordinated response made up of a number of agencies to deliver care that ensures a positive outcome for patients.”