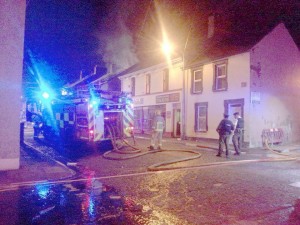 A man is being treated in a Belfast hospital after being critically injured in a gas explosion in the Waterside area of Derry late last night.

The blast occurred in Bond Street shortly after 10.30pm. Following the explosion, neighbours reported the man ran from the house in flames.

The property in which the explosion occurred has been badly damaged

The injured man is understood to have sustained serious burns injuries and was rushed to Altnagelvin Hospital before being transferred to the Royal Victoria Hospital in Belfast where he is believed to be in a critical condition.

Up to 15 homes were evacuated following the blast but the police cordon has since been significantly reduced and most have been allowed to return to their homes.

Deputy Mayor of Derry Cllr Gary Middleton, who attended the scene, said his “thoughts and prayers” went out to the injured man, understood to be in his late 30s, and his family.

He said: “It is quite a distressing scene for everyone involved. The circumstances surrounding what happened are not clear yet. We are aware there it was gas cylinder inside the house but how that was ignited we are not too sure but I am sure we will find out those details in due course.”

He added: “Our thoughts and prayers to out to injured man and his family. I am sure it is a worrying time for them.”

Firefighters from Crescent Link fire station in the Waterside who attended the scene have now left but Bond Street remains sealed off.