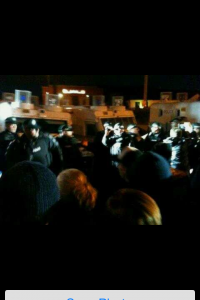 SCUFFLES have broken out for a second night during the nightly loyalist protest at Twaddell Avenue in north Belfast.

Police have drafted in more reinforcement as tensions mount between PSNI riot squad officers and protestors.

A prison van has also been moved into the flashpoint area of north Belfast.

No one was arrested and no one was injured.

There is also a protest at Flax Street and Cambrai Street.

A loyalist source in the area accused police of “stirring up tensions”with protestors.

The Police Ombudsman is now investigating a complaint about police actions on Monday night.

“This is happening night after night now,” said the loyalist source.

“Police move in to remove a flag from the protest site. This happened on Sunday night when they removed a union flag sent from a soldier in Afghanistan.

“Police only move in to removed a flag when there only women about.

“Last night, a number of women were beaten by the cops.

“Then when the men arrived and seen what was happening, the police waded into them, some of whom were elderly Orangemen.

“One elderly man was struck in the chest.

“It has caused a lot of anger both on the ground and also on social media sites.

“Loyalist pages on Facebook have been calling for guns to brought back out and used on the police. That’s just angry people are at the moment at the way they are being assaulted and abused by police.”

One police officer has been singled out for abuse by protestors on Tuesday night.

Added the source: “The protestors have been chanting his name all even. But he hasn’t turned up.

“He has been detailed to sit in a land rover on the Woodvale Road and is keeping a low profile.”


2 Responses to SECOND NIGHT OF CLASHES AT TWADDELL PROTEST