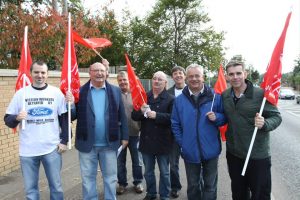 FORMER Visteon workers who are still battling for pension rights staged a white line protest in Northern Ireland at the weekend.

More than 50 former employees returned to the gates of the Belfast factory where in 2009 they staged an occupation for 49 days.

The protest was part of a UK-wide demo which saw similar action in Basildon, Enfield and Swansea.

It was a reminder that following four and a half years following the closure of Visteon, Ford Motor Company has still not paid the pensions they owe to their former employees.

“We say to them stand by and meet the promises made and we can stand down, listen to your ex-employees and the public.”

A minute’s silence was held in memory of the colleagues who have passed away since March 2009 including Jackie Small, one of the leaders of the occupation.

Ford Motor Company created a new company in 2000 – Visteon UK – and transferred employees and their pensions to this new company.

Unite the Union says is was a “flawed business structure”, with Ford immediately reducing the price of parts purchased from Visteon.

The Visteon pension scheme was transferred to the Pension Protection Fund with immediate large pension reductions and the promise of further losses in the future.

Unite the Union is presently pursuing a legal claim against Ford for these broken promises with a court date set in 2014.