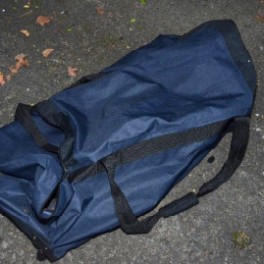 DETECTIVES investigating the failed mortar attack in Derry last week have released a photo of the holdall which police suspect was used to carry the device to its launch point.

Officers from the PSNI Serious Crime Branch believe the blue holdall containing the mortar type device – discovered late on Thursday night – was either carried or wheeled to Lawrence Hill.

They are appealing for anyone who recognises the holdall, which might normally be used to carry sports gear or promotional equipment, to contact them on 0845 600 8000.

They also want to speak to anyone who saw it being carried or wheeled in the Lawrence Hill area last night.

The device had all the component parts to make it viable.

Close to 1,000 people had to leave their homes because of the alert.

Alternatively, if someone would prefer to provide information without giving their details, they can contact the independent charity Crimestoppers and speak to them anonymously on 0800 555 111.


One Response to POLICE ISSUE PHOTO OF MORTAR BOMB HOLDALL