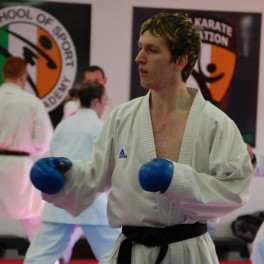 A KARATE fighter is on his way back home to Northern Ireland after kicking and punching his way to a world title.

Dermot McFeely, from Claudy, Co Derry was crowned world champion at the Under-21 Karate Championships in Italy yesterday.

Speaking after his success, he said his was “in the clouds” and all the hard work he had put in prior to the championships had paid off.

He added: “This is what all the hard work and commitment all these years have been for.”

SDLP Cllr for the Claudy area, Brenda Steveson, was among the first to congratulate Trevor on his achievement.

She tweeted: “Well done and big congrats to Dermot McFeely from Claudy crowned world champion in the under 21 karate championship in Italy.”