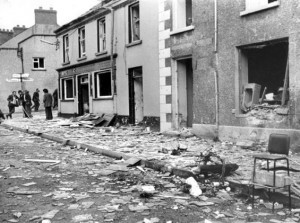 The devastating aftermath from the IRA bomb attack in Claudy, Co Derry

A woman injured in the Claudy bombing over 40 years ago in which nine people died has hit out at the decision by police to suspend their investigation into the atrocity.

Scores were injured when three bombs exploded in the Co Derry village in July 1972. No one claimed responsibility for the attack although the IRA have been blamed.

Both Protestants and Catholics were killed the blasts. The youngest, Kathryn Eakin (8) was cleaning the windows of her family’s grocery store when the first bomb exploded.

Relatives have been now been told by police their investigation will only resume when new information was received.

One of those injured, Mary Hamilton, an Ulster Unionist councillor on Derry City Council, has criticised the police decision said she and relatives of the victims would continue their fight for justice.

She said the people of Claudy were “forgotten about.”

Cllr Hamilton said: “Here we are ten miles down the road, Bloody Sunday got so much money spent on them and the people of Claudy are just forgotten about.”

In 2010, a report by the Northern Ireland police ombudsman report said detectives had concluded catholic priest, Fr James Chesney, who was later moved to Inishowen in Co Donegal, was a suspect.

The ombudsman’s report said police, the state and the Catholic Church had covered up Fr Chesney’s suspected role in the bombing.

No action was ever taken against Fr Chesney, who died in 1980.