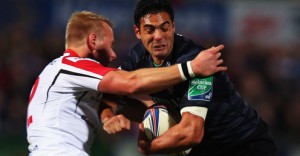 ULSTER kick started their Heineken Cup campaign with a winning start in a 22-16 victory over Leicester at Ravenhill.

Leicester were outplayed in the second half particularly at the breakkdown, but a penalty from Owen Williams three minutes from time earned them what may prove to be a crucial bonus point in what promises to be a tight group.

It was the visitors who opened the scoring on six minutes, when big prop Logovii Mulipola powered over in the corner and Toby Flood duly added the extras.

Ulster won a penalty on 14 minutes, and drove the ball deep into Tigers’ territory.

Ulster played the advantage from the ensuing line-out penalty, and a terrific cross-field kick by Jackson saw Bowe outleap Niall Morris and touch down in the corner, with Jackson slotting the conversion to level the score at 7-7.

But parity was short lived, and Flood restored the Tigers’ lead with a well-struck penalty on 19 minutes.

And the technical proficiency of the Leicester scrum saw the English club secure forward ascendancy for large portions of the half, with Lion Dan Cole giving Ulster loose-head Tom Court a torrid time.

But Ulster’s defensive resilience kept them in the contest, and Jackson levelled the score on 31 minutes, following a spell of concerted pressure.

By now, last season’s Pro12 runners-up were giving as good as they were getting in the physicality stakes and they were able to capitalise on their renewed momentum, and nearly crossed the Tigers’ line on 38 minutes, but a wily Leicester rearguard gave away a penalty rather than concede more, with Jackson making it 13-10 at the break.

The second half nearly got off to the perfect start for the hosts, when Jackson intercepted in his own 22, and ran the length of the pitch to touch down.

But the referee whistled him back for offside, and Flood kicked the penalty to level at 13-13.

And the TMO further incurred the ire of the partisan home crowd on 48 minutes; when he correctly ruled out a Darren Cave try due to a forward pass by Luke Marshall.

The Ulstermen seemed to start the second period with greater urgency, and the introduction of Ruan Pienaar infused the Irish side with renewed impetus. Jackson had an opportunity to restore his team’s lead on 54 minutes, but for once he badly scuffed his kick.

Ulster’s cause was aided on 58 minutes when Leicester number eight Jordan Crane was yellow carded for cynically obstructing Pienaar. The fly-half converted the resultant penalty to make it 16-13 to the Ravenhill outfit.

Their lead seemed to have been short-lived when the Tigers were awarded a penalty on 61 minutes, but the usually bankable Flood missed the kick.

So it was Jackson who extended his side’s advantage on 65 minutes, following some tremendous work by home tight-head, Declan Fitzpatrick at a Leicester scrum.

Jackson increased the lead to nine points on 72 minutes by nailing another penalty, following some powerful surges from the home forwards.

But substitute Williams crucially brought his team back within losing bonus-point range when he slotted a penalty on 76 minutes.