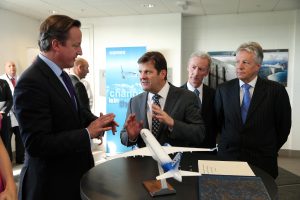 BOMBARDIER Shorts, the Canadian aircraft maker, has announced it is creating another 250 jobs in Belfast this year.

UK Prime Minister David Cameron visited Bombardier on Friday during an investment conference being hosted at Belfast’s Titanic Quarter by the First and Deputy First Minister.

Wings for the firm’s C-series aircraft are made at Queen’s Island in east Belfast.

“What we need in our country is more businesses and jobs like this,” Mr Cameron told workers on the factory floor.

The Canadian company, which has a long-term presence in Belfast, has over recent years been rolling out a £520m investment in its facilities in the city.

On Thursday the Secretary of State Theresa Villiers said the government had approved the business case for a £120 million research and development project at Bombardier which would create 230 jobs.

“The prestigious LEED certification of our new Belfast facility also demonstrates that not only are we on the right track with our innovative and environmentally conscious products, we are also delivering on our commitments as a responsible corporate citizen,” he said.