DISSIDENT republicans have failed in attempt to bomb the PSNI headquarters in Derry.

Police have confirmed the object at the centre of the ongoing security security alert in Lawrence Hill, several hundred yards from Strand Road police station, was a “viable mortar type device.”

PSNI Superintendent Stephen Cargin said those behind the attack had shown a “complete disregard” for innocent lives by leaving the device in a popular residential area.

Supt. Cargin added: “Close to 1,000 people had to leave their homes last night because of the misguided actions of the people responsible for this incident. It is only by good fortune that we are not talking about loss of life or serious damage to property.

“While the device will be forensically examined in due course it is safe to say that the intent here was to kill or injure and create fear within the community.”

At the height of the overnight alert, up to 1,000 people were moved from their homes.

Streets in the area were closed off with traffic being diverted away from Clarence Avenue, Lawrence Hill, a section of the Northland Road, Queen’s Quay and the section of the Strand Road along the front of the station, 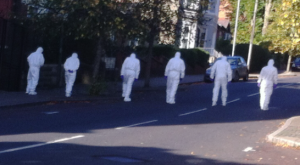 The police cordons have since been reduced in the area and most of the residents evacuated have been allowed to return to their homes except for those living on Lawrence Hill and which remains sealed off. Nearby Clarence Avenue also remains closed.

Supt Cargin appealed to anyone with information about the device to contact police on 0845 600 8000.

He added: “Alternatively, if someone would prefer to provide information without giving their details, they can contact the independent charity Crimestoppers and speak to them anonymously on 0800 555 111.”