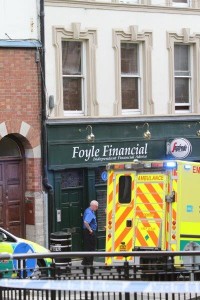 The murder scene in Derry’s Shipquay Street on Thursday lunchtime

She was taken from the scene a short time ago by police officers before being transferred to Altnagelvin where she is now being treated for shock.

It’s understood she witnessed the horrific killing of a local man in his 30s.

The victim was originally from the Galliagh area of the city and lived recently in the Rosemount area.

He was shot dead in a flat above Foyle Financial Services and Claude’s Restaurant at the top of Shipquay Street.

The murder has been condemned by people across the city today.

A rally in protest at the killing will take place tomorrow at 11am in Guildhall Square.

PSNI detectives and forensic specialists are at the scene.

Already dissident republicans are being blamed for the murder.