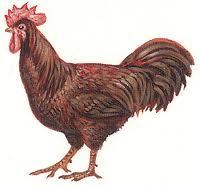 A Rhode Island similar to the ones stolen from family

A FAMILY have appealed for the return of six hens stolen from their home during the night.

The birds – four Rhode Island Reds, a White Leg Horn and a blue-grey feathered chicken -were taken from their coop at the family’s home in Derry’s Kilfennan area of the Waterside.

The thieves also made off with chicken meal and a lawnmower.

The thieves initially took seven hens but one was found by the side of the road nearby.

The family say their grandchildren have been “devastated” by the theft.

They say they are “baffled” by the theft.

“There is not much value in a chicken. You can go to Limavady Market and get one from between £5 and £10.

“We don’t mind about the lawnmower we would just like to have the chickens back. What has happen is nasty and whoever has done this are just horrible.”

The family appealed to anyone offered hens to check where they had come from.