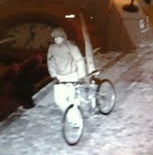 He was taken to Antrim Serious Crime Suite for questioning.

The arrest came 24 hours after police renewed their appeal for information about the attempted bombings.