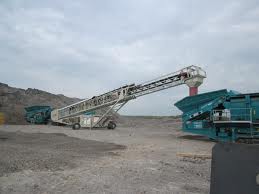 Mining equipment made by Telestack in Omagh, Co Tyrone

CO Tyrone has received a jobs boost on Wednesday.

An Omagh engineering company has announced it is creating 40 new jobs as part of a £3.1 million expansion.

Telestack hopes to increase worldwide sales of its bulk transport equipment on railways and mines.

DUP Enterprise Minister Arlene Foster said the 40 new jobs will rake in over £1 million per annum to the economy.

Invest NI is supporting the factory expansion and IT support with £444,000 of cash, some of which is coming from the European Regional Development.

Said Minister Foster: “This substantial capital investment is a significant boost for one of our most successful industries.”

“Northern Ireland is a recognised centre of excellence in the design and manufacture of materials-handling equipment.

“This investment is very welcome news for the local area which is renowned for heavy engineering equipment production and also has the skills base to facilitate Telestack’s growth plans.”

Telestack managing director Adrian McCutcheon said: “We aim to substantially increase our sales from global customers by 2016 and so need to extend our workforce and operational facilities to support this expected growth.

“The support offered by Invest NI was essential in our decision to undertake this expansion which will help to underpin our competitive position in the sector and secure emerging new business across South America, Australia, Africa and the USA.”