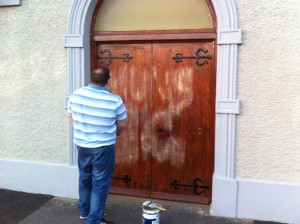 A SECTARIAN attack on a Protestant church  at the weekend has been widely condemned.

Pro-IRA slogans were daubed on the front wall of Ballyarnett Presbyterian Church on Racecourse Road in Derry between 2.30 pm on Saturday and 10.30 am on Sunyesterday morning.

Members of the congregation spent Sunday painting over the graffiti.

William Duncan, a member of the congregation, said those responsible were not representative of the community they came from.

He said: “You never expect this to happen. We were involved in an outreach programme and were involved in distributing, along with all the other Churches, the Gospel of St Luke all around the Ballyarnett area.

“We are outreaching to the community and our Service of Harvest was a great success – people from the community called into to congratulate us.”

He added: “They need to be educated that what they are doing is not what the people from around here want because people have been calling in and telling us, offering us support.”

The attacked has been widely condemned.

SDLP MLA Pat Ramsey condemned the attack as “wanton destruction” and called on anyone with information to “immediately” contact the police.

Police in Derry said they were treating the attack as an incident of “criminal damage.”

A PSNI spokesperson said anyone who may have noticed anyone acting suspiciously in the area or anyone who had any information to contact them at Strand Road on 0845 600 8000.

The spokesperson added: “Or, if someone would prefer to provide information without giving their details, they can contact the independent charity Crimestoppers and speak to them anonymously on 0800 555 111.”


2 Responses to ANGER AT ‘IRA’ GRAFFITI DAUBED ON PROTESTANT CHURCH