EXCITEMENT GROWS AS LOTTO GETS BIGGER AND BETTER 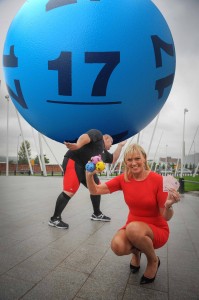 NATIONAL Lottery players in Northern Ireland are preparing for the launch of new Lotto.

• a new Lotto raffle in which at least 50 winners will scoop a guaranteed £20,000 each in every Lotto draw (Wednesday and Saturday). If the jackpot rolls, the number of raffle winners grows too.

New Lotto tickets cost £2 per line and are on sale from Thursday October 3.

A National Lottery spokesperson said: “The balls are an iconic part of people’s lives in Northern Ireland and across the country.

“With a guaranteed 1,000 winners of £20,000 this Saturday and a £10 million jackpot up for grabs, there has never been a more exciting time to play.

“As well as giving players more ways to win more money, new Lotto will also be helping to raise more funding for National Lottery projects all over Northern Ireland.

“Each week, National Lottery players raise £35 million for Good Causes in the UK.”

And as thoughts turn to picking those all-important six numbers, a survey carried out by the National Lottery reveals that people in Northern Ireland believe the number 17 is the luckiest – despite it not being a regular feature in the main draws.

A National Lottery spokesperson said: “The number 17 has only been drawn 222 times as a main ball and 38 times as a bonus ball which makes it a number that’s drawn less than average.

“However, as Northern Ireland has celebrated no fewer than 20 millionaires in less than three years – maybe they have some insider knowledge in this part of the world! And let’s not forget that the biggest ever individual Lotto winner, Iris Jeffrey, who won £20.1 million in July 2004, was from Belfast.”

To celebrate the launch of the new-look lottery, giant Lotto balls were floated downthe River Thames halting traffic and forcing the opening of Tower Bridge to let them float past many famous landmarks in the City. Balls then also landed in other locations around the UK, including Belfast.

The research revealed that the people of Northern Ireland consider 17 to be much luckier than the rest of the country. It also showed that:

• More than a third (38 per cent) are superstitious about performing a good luck ritual – such as crossing their fingers, knocking on wood or kissing the ticket – when playing The National Lottery. Two per cent even have a pair of lucky underpants to wear when buying their ticket.

• Those aged between 18-34 years of age are the most superstitious, proving it isn’t all old wives tales. Among the young, 54 per cent carry out lucky rituals when buying their Lotto ticket. Surprisingly, over 55s are the least superstitious with just 21 per cent believing in lucky rituals.

• However, after purchasing their ticket, 28 per cent said they would not trust their family or friends to keep it safe before the draw.

Playing new Lotto is just as easy as it’s always been – players will still choose six numbers from 49 using a play slip, their Fast Pay card or by asking for a Lucky Dip and draws will still take place on Wednesdays and Saturdays.

From Thursday October 3, for every line of Lotto played, the player will receive a unique raffle number printed at the bottom of their ticket giving them a chance of winning one of 50 guaranteed prizes of £20,000.

To be in with a chance of winning the giant jackpot or new raffle prize, ensure you have a ticket for the new Lotto draw on Saturday October 5.

They are available from any National Lottery retailer or via national-lottery.co.uk


One Response to EXCITEMENT GROWS AS LOTTO GETS BIGGER AND BETTER