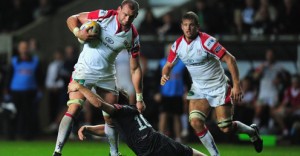 IT may not have been pretty but Ulster snatched a win from the jaws of defeat on Friday night.

The trusted boot of Paddy Jackson kicked all of Ulster’s points as the Ravenhill men ended Ospreys’ unbeaten start to the RaboDirect PRO12 season.

And it was another win on the bounce for Mark Anscombe’s men who came from a half time deficit to win 18-12 at the Liberty Stadium.

Ospreys led 12-0 early in the second half through four Dan Biggar penalties, but Ulster roared back with Jackson knocking over six unanswered kicks.

Neither side managed to take control of the game in what was a brutal opening quarter, highlighted by David McIlwaine’s introduction for Craig Gilroy, who left the field with an injury early on.

Biggar’s penalty gave the Ospreys the lead in the 21st minute after number eight Nick Williams was penalised for not rolling away after taking down Tito Tebaldi.

Both sides were defending superbly, with a number of big hits flying in, including Canadian flanker Tyler Ardron’s thumping tackle on Paul Marshall.

Joe Bearman and Ashley Beck both made line-splitting breaks but the defences remained on top for both sides.

With the final play of the first-half, Dan Tuohy was harshly adjudged to have elbowed Ospreys captain Alun Wyn Jones, and Biggar stepped up to give the hosts a six-point lead at the break.

After a well controlled defensive effort in the first half, Ulster gifted the Ospreys two penalties in the first four minutes of the second half after being penalised for being offside and not rolling away.

As ever, Biggar relished the opportunities and slotted both kicks between the posts to put the home side 12 points in front.

Ulster finally registered some points on the scoreboard as fly-half Jackson kicked a long-range penalty after Lions star Adam Jones was penalised as the scrum.

Ospreys captain Alun Wyn Jones was then flagged up by referee Peter Fitzgibbon for being offside and Jackson kicked his second penalty to reduce Ulster’s deficit to six points.

The Irish international had been embroiled in a kicking duel with his opposite number all night and he slotted home a third penalty after 57 minutes.

Mark Anscombe’s side were bossing the game with 20 minutes to go but the Ospreys defended resolutely through a number of phases with the game hanging on a knife-edge.

With 15 minutes left on the clock, Jackson levelled the scores as lock Ian Evans, on his 29th birthday, conceded a penalty inside his own 22.

The turnaround was completed with only seven minutes remaining as Jackson launched a thunderous penalty through the posts from only inches inside the Ospreys half.

With the visitors’ tails well and truly up, Jackson kicked a sixth penalty after Aaron Jarvis was sin-binned minutes from time to complete a stunning comeback.

Ospreys were camped on Ulster’s try-line for the final minutes of the match but a knock-on at the death confirmed the win for Anscombe’s warriors.