TRAIN TICKET EXCUSES FIASCO: I USED MY TICKET AS YOU HAD NO TOILET ROLL 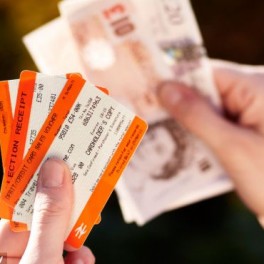 A train passenger gave a “bum steer” reply when he was unable to present his ticket when requested, it has emerged.

Train operator Translink have not identified what service the passenger was on at the time other than to say it was a Northern Ireland train.

The passenger said: “There was no toilet paper in your toilet, so I had to use the ticket.”

The outrageous excuses were disclosed by Translink as it revealed 22 passengers were fined £2,508 for ticketing irregularities last. In addition, 70 penalty fares were issued for fare evasion, resulting in fines totalling £1,579.40

“You are a public service and I paid my taxes, now you are looking more money.”

“I’m a part-time police officer, so I don’t have to pay.”

“I didn’t hear the conductor asking if I needed a ticket; I was asleep/had my headphone on/was looking out the window.”

“My brother is a solicitor and you will be in big trouble.”

“I just bought this ticket before I got on the train, your machines must be wrong (passenger with out-of-date ticket)

“My mum/dad have paid for my ticket at the other end.”

All the passengers who used such excuses were issued with an on-the-spot fine and/or prosecuted for fare evasion.

Hilton Parr of Translink said: “We’ve really heard every excuse under the sun from passengers for attempting to travel without paying.

“The majority of our customers are honest and pay the correct fare and, as such, it is only right that we take a tough line with those who try to fare dodge.

“The point I would make is that no matter who you are, if you want to travel on our services, you have to pay.”

The average fine issued to fare evaders in 2012 was £20 plus the value of the ticket for the distance they travelled.

If the passenger does not pay on the spot and is unable to produce ID, the police may be called.

Non-payment of the penalty may result in a court appearance plus a fine of up to £1,000.

Anyone caught and prosecuted will have a criminal record which could prevent them visiting countries like the US and Australia.