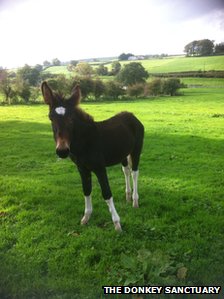 Lugs the donkey which has been rescued from Ligoniel mountains

POLICE rescued a young mule after she was found by officers in north Belfast beside the body of her mother.

The animal’s mother had been shot in the head and had to be put down.

The PSNI say officers were called to the Ligoniel mountains.

It followed a call from a member of the public who reported seeing a horse in distress.

Officers went to the scene where they found the animals side by side.

The mother was in severe pain from the gunshot wound to its head.

A vet was taske summoned to the scene to examine the animals.

But such were the severity of the mother’s injuries that she had to be put to sleep.

The foal is a mule, a hybrid of a donkey and a horse, and it is now in the care of the Donkey Sanctuary charity organisation and has been named as Lugs

Its welfare officer Allen Andrews said the attack was one of the “most brutal” he had seen.

“It is tragic that this young mule and her mother experienced so much suffering through human cruelty,” he said.

Mr Andrews said the number of donkeys and mules being abandoned in Northern Ireland had reached an “alarming level” with figures almost doubling over the last two years.

“From January to August 2013 we have rescued 96 animals that had been thrown out to fend for themselves,” he said.