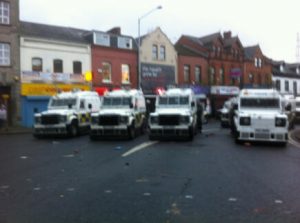 LOYALISTS are calling for province-wide road blocks on Thursday evening to show their opposition to a Parades Commission ban on an Orange Order parade in north Belfast this weekend.

Belfast Daily understands that loyalist pages on Facebook are urging people to take to the streets from 6pm to 8pm on Thursday evening.

It follows a decision on Wednesday by the Parades Commission to ban an Orange Parade past the Ardoyne shops on Saturday morning.

Said a source: “Most people who have been canvassed on Facebook are in agreement to block roads on Thursday evening across Northern Ireland.

“There could be a number of flashpoint areas. East Belfast could become a powder keg.”

Similar protests and the blocking of roads were held from last December after Belfast City Council voted to fly the Union jack flag on the City Hall only on designated days.