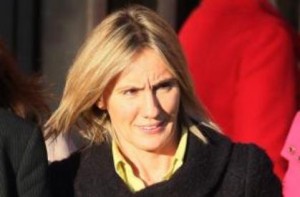 WOMEN inmates locked up in a Northern Ireland jail are being strip-searched “excessively”, says a damning report.

The Criminal Justice Inspectorate (CJI) said the female prisoners were subjected to an unnecessary and disproportionate number of strip searches.

The report said: “All women were needlessly strip searched on arrival and randomly after visits, which was excessive.”

A total of 57 women are housed in Ash House including killers Hazel Stewart, Jacqueline Crymble and ‘Black Widow’ Julie McGinley.

Inspectors carried out separate inquiries at the female unit a Ash House and Hydebank Wood Young Offenders Centre on a sprawling site in south Belfast.

The report was scathing of both prisons with major concerns raised over safety, frequent lock-downs and rehabilitation.

Evidence also emerged of verbal intimidation from the juveniles, vicitimisation by staff and women were losing out because of frequent lock-downs at the adjacent YOC.

“Overall, this was a disappointing inspection,” said the report.

“In particular because women continued to be held in a predominantly male prison which was having a significant and intractable impact upon outcomes they experienced.

“Women were reasonably well cared for but they were inevitably marginalised and restricted in their access to facilities and services.

“Many security arrangements were overly restrictive, often instigated to address issues in the YOC, and had a disproportionate consequential impact on women.”

The report found that levels of purposeful activity aimed at assisting rehabilitation had deteriorated since the last inspection two years ago.

“Only the long-promised closure and replacement of Ash House would resolve the problems we saw. Recent instability in the management team had also contributed to the problems we highlight, and there was a clear gap evident in leadership and direction,” it said.