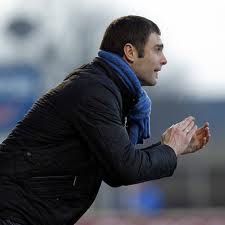 The Lurgan blues seen off Cliftonville last weekend at Mourneview Park with an Andy McGrory tap in from close range.

The three points sent Gary Hamilton’s to the top of the league.

But to stay their his team travel to north Belfast on Saturday afternoon to take on Crusaders (feature match live on BBC Radio Ulster).

Hamilton is refusing to play on the astro pitch which could be a costly decision at the end of 90 mins if the Hatchet Men run out winners.

The Blues are starting to find some form and with Andy Waterworth’s boots on fire David Jeffrey will be hoping for another three points to keep his team in contention after a poor start.

They host Glentoran at Shamrock Park. Eddie Patterson’s team were dumped out of the Co Antrim Shield this week by Cliftonville and performances on the pitch in the league are not what the fans have been expecting.

The Ports will be looking to get back to winning ways after a 2-2 draw at Crusaders last week.

That was the back of a 11-0 drubbing of Ballinamallard when the likes of Gary Twigg and Kevin Braniff sliced through the Mallards defence and tore them to shreds.