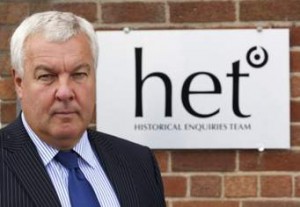 ‘WAKING The Dead’ boss Dave Cox will step down from his role within the next 24 hours.

The former Scotland Yard commander goes amid raging controversy over the handling by the Historical Enquiries Team (HET) of investigations relating to military involvement in killings during the Troubles.

Confusion had reigned for weeks about his future as the head of the HET Team which is looking at over 3,200 Troubles-related deaths.

His position had been in doubt since a damning report by Her Majesty’s Inspector of Constabulary (HMIC) into the way HET reviewed killings by members of the British Army, including covert military units.

According to Her Majesty’s Inspectorate of Constabulary, the UK’s top policing watchdog, the HET had serious shortcomings and risked losing the confidence of victims’ families.

It said the PSNI unit set up to probe more than 3,000 deaths in Northern Ireland should have been more rigorous in how it investigated killings involving British soldiers.

They were treated differently as a matter of policy, apparently based on a misrepresentation of the law, the report concluded.

It added: “This is entirely wrong, and has led to State involvement cases being reviewed with less rigour in some areas than non-State cases.”

The report was delivered to families in Belfast.

Apologising over the HET’s practices, Matt Baggott said: “Let me say at the outset that I am sorry that HET put in place a policy that was wrong.

However, the Policing Board felt Mr Cox should fall on his sword and quit.

The Board made it clear last month during a heated discussion with Mr Baggott that Mr Cox had to go and no later than the end of September.

And if that didn’t happen, then his own position as chief constable could be called into question.

A day later, Policing Board members received an email informing them that Mr Cox would leave his post at the end of September.

The email, addressed to policing board members, stated: “The director of policy has asked me to inform you that the Chief Constable has confirmed this afternoon that both Dave Cox and Paul Johnston will leave their posts in the HET at the end of this month.”

But with 24 hours confusion reigned further when PSNI sources insisted that was not the case.

However, two weeks ago Pollicing Board members were told that Mr Cox will step down from his role on Saturday, September 28.

Since then, he has been working in an advisory role with the HET.