YOU’VE SCOT TO LOVE ALL GLASGOW HAS TO OFFER 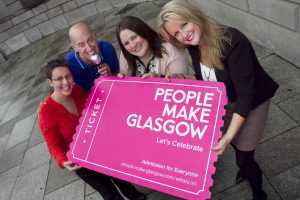 A DAZZLING arts and culture scene, architectural heritage and world-class shopping are just some of the reasons why Glasgow City Marketing Bureau (GCMB) is encouraging visitors to take a short break in Scotland’s largest city.

GCMB today launched a year-long programme of events taking place in Glasgow to inspire music lovers, fashionistas, culture vultures, food connoisseurs and sports fanatics to visit over the next year.

Arts enthusiasts can experience the Creative Mackintosh Festival from October 15 to 28, whilst movie buffs can take in the Glasgow Film Festival from February 20 to March 2, 2014, the fastest growing and third biggest film event in the UK.

There will be no shortage of laughs with both big league players and emerging talent performing at the Glasgow International Comedy Festival taking place from March 14 to April 5, 2014, and there is already much excitement for the kick-off of the 2014 Commonwealth Games from July 23 to August 3, which will see athletes from across 71 nations descend on the city.

GCMB is also working alongside Glasgow Restaurants Association, Glasgow’s Leading Attractions and Glasgow Mackintosh to promote the great food, amazing architecture, fantastic shopping and many free attractions that make the city a perfect short break for all ages and tastes.

“Excitement is already building for the 20th Commonwealth Games being hosted in July and before then we have a plethora of world-class festivals and events taking place with music, comedy, dance and film,” she continued.

“With all of the fantastic events taking place over the next year, there has never been a better time to visit Glasgow, especially as it’s just a short trip across the Irish Sea,” Minty added.

To keep up to date with the latest Glasgow news and events, and to sign up for the newsletter visit www.peoplemakeglasgow.com