TIFFANY IN THE GROVE FOR WORLD STONE SKIMMING CHAMPIONSHIPS 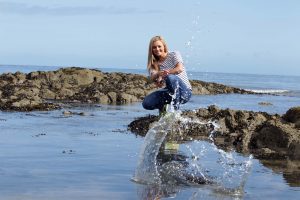 FORMER Miss Northern Ireland Tiffany Brien practices for the World Stone Skimming Championships which is taking place in Easdale Island, near Oban in Argyll, on September 29, 2013.

The championships, which take place on Easdale Island, the smallest permanently inhabited island of the Inner Hebrides, attracts visitors from all over the world with winners from Scotland, Wales, England and New Zealand.

However, the championship is still without a champion from Northern Ireland. As Scotland is only a stone’s throw away, could this be the year for a local champion?

The competition is open to anyone of any age and any level of skill can enter.

Each competitor is allowed 3 skims using specially selected Easdale slate skimming stones. For a skim to qualify the stone must bounce at least three times in the water – it is then judged on the distance achieved before it sinks, rather than bounces.

The event, based on an island, which was once the centre of a thriving Scottish slate mining industry, is one of the many diverse events taking place in the run up to Homecoming Scotland 2014.

The Year will celebrate the very best of Scottish food and drink, Scotland’s outstanding active and natural resources as well as creativity, culture and ancestral heritage. Other quirky events taking place include the World Jampionships, which showcase the best jams, The Gold Panning Championships and The Golden Spurtle World Porridge Making Championships.

The event is only a short flight away with Northern Ireland air routes flying to Edinburgh and Glasgow, from local airports – George Best Belfast City Airport, Belfast International Airport and City of Derry Airport.

Additional easy access routes include short ferry trips from Belfast to Cairnryan and Larne to Troon and Cairnryan. For more information about these special events, visit www.visitscotland.com.