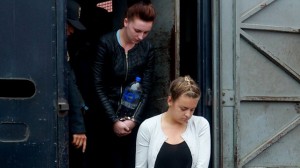 PROSECUTORS have rejected the guilty pleas of Michaella McCollum Connolly and Melissa Reid to trying to smuggle 11.5 kg of cocaine out of Peru to Spain.

Instead, they want McCollum Connolly and Reid to give full confessions over their activities before their guilty pleas are accepted in return for a lesser sentence.

McCollum, 20, from Dungannon, Co Tyrone, and Reid, 20, from Glasgow, pleaded guilty behind closed doors yesterday when they appeared before a judge in the port town of Callao, near the capital Lima.

But state prosecutors have asked for more information before accepting their admissions of guilt, which the women hope will bring their sentence down to six years and eight months in prison.

A spokesman for the prosecutors’ office in Callao said: “The two drug mules’ guilty pleas have not been fully accepted, as far as the prosecutor is concerned, until they give more details.

“They will be asked to give another statement before the judge explaining where the drugs came from, who supplied them and why they said they had been forced to carry them by an armed gang.”

The spokesman said a date was still to be determined for a new hearing, although following their guilty pleas court officials said the women would be sentenced on 1 October.

McCollum and Reid initially claimed they were forced to board a flight from Lima to Spain with the cocaine in food packets hidden inside their luggage when they were arrested last month.

By pleading guilty they sought to reduce the minimum sentence of eight years by a sixth, down to six years and eight months without the possibility of parole.

Reid’s family has previously said they are working with the British Foreign Office in the hope that the Peruvian authorities will allow her to serve part of her sentence in the UK.

Both women, who had been working on the Spanish island of Ibiza this summer, have been held at the harsh Virgen de Fatima prison in Lima.

Court officials have said they may be transferred to the equally tough Santa Monica women’s jail once they are sentenced.