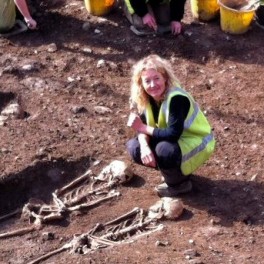 Dr Emily Murray with two of the skeletal remains found at the Bishop Street “dig.”

AN archaeological dig has been extended for a further two weeks after it was revealed artefacts dating back to the Bronze Age were discovered at the site.

The three-week “dig,” which has also uncovered 13 skeletal remains dating back to the 17th century, was due to finish this Friday but has been extended until October 11 by Environment Minister Mark H Durkan because of the “exciting and startling” discovery of the oldest ever artefacts uncovered in Derry’s Bishop Street.

The site has proved a popular attraction with many schools arranging visits for their pupils. Local people will get the opportunity to view what has been found when the site is opened up to members of the public this Saturday.

Emily Murray, lead archaeologicalist working on the site located at a car park in Bishop Street car park next to St Augustine’s Church, said she was delighted with the two-week extension.

She said what had been discovered to date was “very significant” and was proof there had been a settlement in the area “many thousands of years ago.”

She said: “We have uncovered decorated pottery and a flint scraper dating back 2000BC, long before Columba came here and long before the English came here.

Announcing the two week extension when he visited the site this morning, Minister Durkan said he hoped the site would become a tourist attraction.

He said: “What has been uncovered is very exciting and startling and we need to dig more to see what more can be found.”

He added: “I would be very keen to make sure this is preserved and utilised as a tourist attraction.”