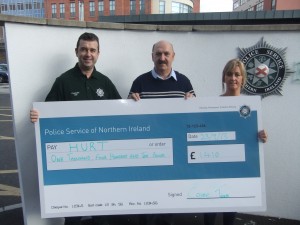 CASH raised from the sale of a convicted drug dealer’s car has been handed over to a charity offering support to drug and alcohol abuse victims.

Police in Derry donated £1,410 to city based charity HURT.

It followed the successful outcome of a court case which saw a then 27 year old man convicted of a number of drug related offences, including drug dealing.

The defendant was given a 15-month-jail sentence and the District Judge also ordered his car be sold by police and the proceeds donated to HURT.

Constable Daryl Watton, from the District Crime Team said the confiscation order made by the judge meant “something positive can be given back to those in need.”

He added: “This was a fairly lengthy investigation and we are pleased with the prison sentence that was handed down.

Dessie Kyle, manager of the HURT centre based in Clarendon Street, thanked the PSNI Crime Team and the judge for nominating HURT.

He added: We are delighted to receive these much needed funds which will go towards helping many people suffering from drug and alcohol dependency.”