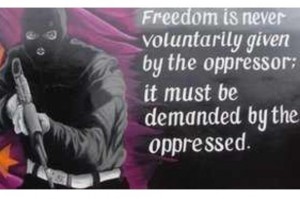 POLITICIANS say they are disappointed a UVF mural has gone ahead despite public objections.

The mural of a masked gun-toting UVF gunman in east Belfast was temporarily halted two weeks ago.

The Best mural had been funded with £1,500 of European Union peace money through Belfast City Council.

But following a public outcry, work stopped on the mural at Inverwood Crescent in the Sydenham area a fortnight ago.

However, at the weekend the UVF mural was finished.

It includes a quote from Martin Luther King which says: “Freedom is never voluntarily given by the oppressor; it must be demanded by the oppressed.”

Local PUP councillor Dr John Kyle said he was “very disappointed” at the decision to proceed with the paramilitary image at Inverwood Court, Sydenham.

His party is the political wing of the UVF.

“I’ve said that I think it’s a disgrace and that it doesn’t represent the views of the people of east Belfast,” Mr Kyle said.

“I think the people of east Belfast deserve better. The vast majority want to look to the future and not to the past.

“It’s been clear that some of those responsible have decided that, regardless of what people have said, they have gone on ahead and finished the mural.

“I know that people have contacted me and said that they are not happy with it, it’s not the sort of mural that they want, that it’s a move backwards. 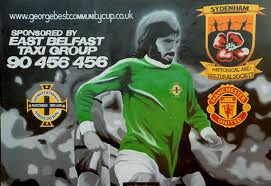 He added that local people should be able to express their views on what sort of mural they wanted in the area without intimidation or threats.

The Alliance Party condemned the finished mural saying it only glorified violence.

Said Chris Lyttle MLA: “The completion of this mural casts a sinister shadow over everything that is positive in east Belfast.

“It is unacceptable that an image which once depicted the world-class talent of George Best has now been replaced by a paramilitary gunman.

“Political representatives have rightly condemned the glorification of terrorism in recent weeks, and must be united and clear in their rejection of all murals of this kind – if we are to build a safe and inclusive society for everyone in Northern Ireland.”