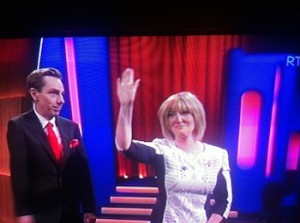 THE wife of country crooner Daniel O’Donnell has hit the number one spot in the charity fundraising stakes.

Majella O’Donnell has become the biggest ever individual fundraiser a cancer charity in the Republic.

The businesswoman has so far managed to raise a staggering £384,384 (€550,000) for the Irish Cancer Society with her recent head-shave on RTE’s Late Late Show.

And the money is still rolling in.

She was recently diagnosed with breast cancer and decided to shave her hair off for the charity.

“We have had a phenomenal response to Majella’s campaign and we are incredibly grateful to Majella and to all those who kindly donated.

“This is the largest response we have had from one individual’s initiative to raise funds for us.”

A special video message from Majella, 52, was broadcast on RTE’s Late Late Show last Friday thanking everyone for their support and donations.