PLEASE GIVE ME BACK MY BIKE, PLEADS TEN-YEAR-OLD BOY 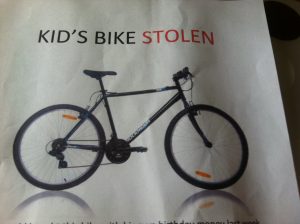 HEARTLESS thieves have stolen a child’s bike he bought with cash saved up from selling his toys.

The black Rock Rider mountain bike was stolen from the home of the ten-year in Bangor, Co Down towards the end of last week.

The schoolboy had bought his pride and joy bike last month on his tenth birthday.

He told Belfast Daily: “I sold some of my toys and put the money towards it.

“I also saved up my birthday money and put it all towards the price.

“We have told police in Bangor. I just want those who took it to give it back to me,” added the devastated boy.

He has also designed a poster giving details of the bike.

Anyone who has information about the theft or the current whereabouts of the child’s bike is asked to contact PSNI on 0845 600 8000.