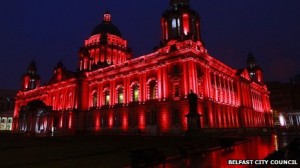 BELFAST’S Sinn Féin Lord Mayor has backed a Royal British Legion request to bathe the City Hall in red for the launch of the Poppy Appeal next month.

But councillor Máirtin Ó Muilleoir is refusing to wear a Poppy even though he lost a relative in 1916.

He says his decision to back the red light plan on the City Hall was in the interests of “building peace”.

However, he was attacked on twitter by opponents who accused him of “doing anything to get into bed with unionists”.

The building’s recently-installed lighting means it can be illuminated with various colours on designated occasions.

On Friday evening at 8 pm the City Hall will be bathed in blue and yellow for the start of Culture night in the city.

The committee proposal will now go before the full council meeting on Tuesday, October 1.

Mr Ó Muilleoir said he had been involved in discussions with the British Legion for six months before he became lord mayor.

“Their aim is the same as mine, to remember the dead of the great war, and the carnage and destruction that destroyed the cream of our manhood across this nation,” he said.

“It’s a request they made. It goes to the main committee today.

“My discussions with the British Legion and the Somme Association are continuing. We are looking at all these things in a bid to find common ground.”

The Lord Mayor was asked on BBC Radio Ulster’s Talkback programme if he would be tempted to wear a poppy for his great grandfather, who served in the British Army and died training soldiers in WW1. He was given a military funeral on the Falls Road in west Belfast in 1916.

“No. I suppose as an Irish republican I’m not alone in the fact I have relatives who died in the Great War and obviously many relatives of other republicans who served in the British Army after that and I hope that we can show respect for the dead without having to wear a poppy,” Mr Ó Muilleoir said.

“I know that it’s something that I won’t do, that I’m not able to do and therefore I need to say that in a way which is respectful.

“So I suppose that makes it even…it’s a bigger challenge because we need to make sure that what we don’t do is we don’t insult each other in how we remember the dead,” he told presenter Wendy Austin