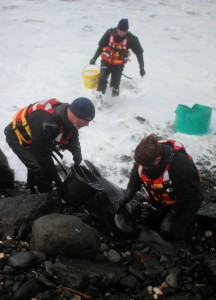 A second whale has been found dead along the North Coast.

The Department of the Environment was monitoring the activities of the whale as it swam around Whitepark Bay for almost a fortnight.

However, the whale got separated from its mother and later died.

A nine-metre long juvenile Sei whale died on a beach near Waterfoot on Saturday.

The DOE said staff had been monitoring the whale closely from the shore and by boat.

“High resolution photos had clearly shown that the animal was an un-weaned calf, separated from its mother and severely emaciated,” said a spokesperson.

“Regrettably for this animal, given that it would be fully dependent on its mother at such an early stage in its life, the inevitable conclusion was that the animal would be unable to survive alone.”

The animal became stranded near Portballintrae Bay and had to be put down on Monday.


One Response to SECOND WHALE DIES OFF NORTH ANTRIM COAST