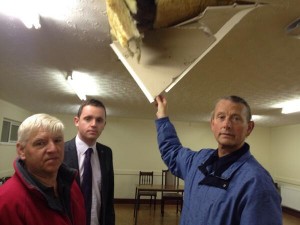 A leading member of the Orange Order in Derry has described an attack on one of the organisation’s halls on the outside of the city as a “hate attack.”

Thieves who broke into the hall at Fawney Road in the Ardmore area last night, stole two loyal order banners and a historic portrait of King William. Considerable damage was caused and the letters “INLA” daubed on a wall.

Alderman Devenney said he was now concerned other rural Orange halls in the Derry area would be targeted.

Speaking after visiting the hall, he said: ”There were two plaques up on the wall because the hall had previously been burnt twice before, and they inscribed the letters INLA into them.

“This is a sectarian attack and a hate attack on this hall and I do have worries if this is a trend that’s going to be set down here in Londonderry now for other rural halls that are out in very quiet locations.”

DUP MLA Willie Hay claimed those who targeted the hall were intent on “raising tensions” after a “good parading season.”

He added: “A lot of work went on behind the scenes, but quite obviously we’ve still got people within the community who are deliberately going out to heighten tensions when there is no real tension there.”

Sinn Féin Cllr Paul Fleming has called for the stolen items to be returned.

He added the attack was “wrong” and those responsible needed to think about their actions and the effect they had on community relations.”

Describing the attack as “sectarian,” Cllr said there was “no justification” for attacks against any section of the community.

He said: “There have been attacks on Orange halls and GAA clubs across the North. Both are equally as wrong and need to be brought to a stop immediately.

He concluded: “There can be no justification for attacks against any section of the community whatsoever.”