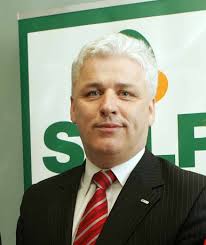 A FORMER TV reporter has been elected to replace Conall McDevitt as the SDLP’s new MLA in south Belfast.

Fearghal McKinney, 51, beat off his rival and Belfast city councillor Claire Hanna during a constituency association meeting on Thursday night.

The father-of-three polled 113 votes to Claire Hanna’s 69 at a south Belfast hotel.

Mr McKinney, who was brought up in Co Fermanagh, is expected to be installed as MLA next week in the Stormont Assembly.

The selection process was sparked after Conall McDevitt dramatically quit politics and public life when he became engulfed in a series of payment scandals.

The final straw came when it emerged that he had failed to declare a payment of £6,750 from his former PR firm employers on the register of Members’ Interests at the Assembly.

Following his election as MLA, Mr McKinney said it was an “honour” to be picked by south Belfast delegates to represent them.

“I bring SDLP values and a steadfast commitment to improve our political discourse and champion the hopes and ambitions of people across this region,” he added.

A defeated Ms Hanna was magnanimous in defeat and congratulated Mr McKinney on his selection.

Mr McKinney is currently vice-chair of the SDLP and also acts as an advisor to party leader and south Belfast MP Dr Alasdair McDonnell.