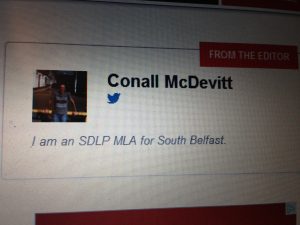 Is Conall McDevitt still hanging on to the last shreads of office?

TO resign or not to resign? That is the question.

But according to his Twittter page it appears he is still believes he is the MLA for south Belfast, as Belfast Daily’s photograph shows.

It was taken on Tuesday evening following the launch of his Twitter page ‘The Conall McDevitt Daily is Out!”

However, the party is adamant that Mr McDevitt has resigned his seat.

And on Thursday night, his replacement will be voted in by the SDLP’s south Belfast constituency association.

The 8pm meeting will see members come face-to-face with the candidates – Claire Hanna, daughter of former MLA Carmel Hanna, and Fearghal McKinney, a former reporter with UTV who now acts as an advisor to party leader Dr Alasdair McDonnell.

Give her mum’s long association with the south Belfast association, party insiders are predicting that councillor Carmel Hanna will be McDevitt’s replacement in the Stormont Assembly.