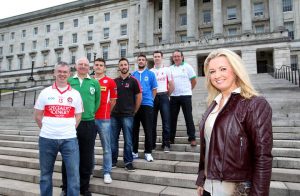 UUP MLA Jo-Anne Dobson and stars of GAA, soccer and rugby who back her Organ Donor Bill

UUP Upper Bann MLA Jo-Anne Dobson has announced that she will be extending the time period for the public to respond to her Private Members Bil aimed at changing local organ donation laws to an opt-out system.

Commenting the Mrs Dobson said: “I have been overwhelmed by the sheer volume of public response to my Bill since the consultation was launched at Stormont back in June. So much so that some organisations have asked for a little more time to get their views in and I am happy to announce an extension to 24 September.

“The meetings which I have been holding over the summer months with lobby groups, church leaders and medical organisations have been extremely helpful as their views will help shape the proposed Bill.”

GAA all-star and Opt for Life campaigner Joe Brolly alongside colleague Shane Finnegan said: “This proposal threatens no-one but provides many with a beacon for life and hope.

“With this subtle, but vital, legislative change the numbers of people receiving organs would greatly be increased and with the next of kin always having to provide their consent at the hospital before donation can proceed, the family is at the heart of this proposal.

“We would encourage people to consider the merits of this legislation and respond to the consultation.”

Northern Ireland football star Gerry Armstrong who has been appointed as an organ donation ambassador on behalf of the Irish Football Association commented: “This is the very first time the people of Northern Ireland have been given the opportunity to give their views on a change to the organ donation system.

“It’s great to hear that the public now have longer to respond and I would encourage them to take time to help and get involved by sharing their views on this important issue.”

Mrs Dobson is encouraging everyone to take a few minutes to complete the ten questions and give their views on changing the law.

The consultation is now open to responses until Tuesday 24 September at 5.00pm.