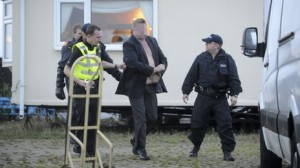 PSNI detectives are continuing to question three men arrested in Northern Ireland on Tuesday as part of a UK-wide probe into the thefts of “priceless items” from museums and auction houses.

The men – aged 43, 46 and 59 – were detained in the Belfast area as part of the nationwide operation.

The suspects remain in custody and are being questioned about conspiracy to burgle properties.