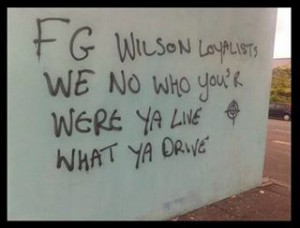 A DUP delegation has met the PSNI over a graffiti threat to Protestant workers at a west Belfast factory.

It followed the appearance at the weekend of graffiti written on a wall at Springfield Road threatening Protestant workers in the FG Wilson (Caterpillar) plant in Springvale Business Park.

The graffiti, scrawled on the side of a shop at Springfield Drive, on the lower Springfield Road, stated: “”FG WILSON LOYALISTS WE NO WHO YOUS R WERE YA LIVE WHAT YA DRIVE” (sic).

Following the meeting, Alderman William Humphrey MLA said his office had been contacted by a number of Protestant workers at the plant.

“They are obviously very concerned by this threatening graffiti.

“The PSNI inspector made clear that they have no intelligence information which would suggest that such a threat exists.

“Nonetheless, he made clear that the PSNI remains willing to offer assistance to any member of the workforce feeling intimidated and he provided contact details for the appropriate officer.”

“But are disappointed that so far they not acceded to this request.

“Whilst it did not appear within the confines of the factory site, this graffiti was scrawled on a wall along one of the main access streets.

“It is essential that the company recognises the seriousness of this.

“There have also been previous incidents of threatening graffiti appearing inside the factory building.

“Whilst the PSNI have made contact with a company manager we have asked the police to again contact the company to ensure that adequate priority is being given to the safety of workers.

“We will also be pursuing this threat with the relevant trade unions,” added the DUP MLA.