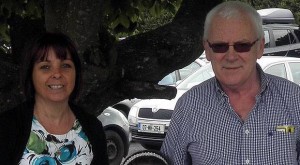 Patricia Kierans who Gardai believe was blasted to death by her estranged husband Oliver (right). He has now been charged with her murder

A 56-year old man has appeared before Cavan District Court on Tuesday charged with the murder of his west Belfast-born wife.

He was also charged with possession of a firearm.

The court heard he made no reply after being charged and cautioned on the murder offence.

Dressed in a green fleece top and blue checked shirt, he was remanded in custody to Castlerea Prison to appear in court again on Friday.

Judge Sean McBride ordered he receive medical and psychiatric attention and placed him on suicide-watch while in custody.