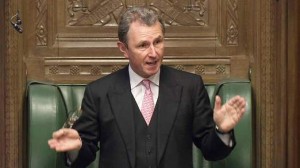 NIGEL Evans MP has on Tuesday night been charged with two counts of indecent assault,  five of sexual assaults and one of rape.

As a result, he has now resigned his position as deputy speaker.

Mr Evans, 55, was arrested on Tuesday morning for the third time since May as he answered bail over the earlier allegations.

He was held at Preston police station on suspicion of indecent assault and sexual touching.

The Tory MP arrived at the police station in a silver Jaguar driven by his solicitor just before 9am, where he was met by detectives.

He smiled at members of the press gathered outside and said: “Thanks for coming.”

Earlier today, a police spokesman said: “A 55-year-old man from Pendleton in Lancashire has today answered his bail following his arrest in May on suspicion of rape and sexual assault and in June on suspicion of three further offences of indecent assault.

“He has subsequently today been arrested on suspicion of indecent assault and sexual touching of two further victims.

“He will be interviewed about these new allegations at a police station in Lancashire during the course of the day.

“These new offences are alleged to have been committed in London between 2002 and 2009.”

All of these allegations involve men in their 20s.

Mr Evans dismissed the original claims against him as “completely false” and said they had been made by two people he had “regarded as friends”.

In June, he said: “I continue to refute all allegations.”

The politician has stepped aside from his Speaker duties since his arrest, but has continued to work as MP for Ribble Valley.

He was one of three deputy speakers elected in a secret ballot of MPs in 2010. Later that year he came out as gay, saying he was “tired of living a lie”‘.

Lancashire Police said: “We take all allegations of a sexual nature extremely seriously and understand how difficult it can be for victims to have the confidence to come forward.

“As a constabulary, we are committed to investigating sexual offences sensitively but robustly, recognising the impact that these types of crimes have on victims.

“We would encourage anyone who has experienced sexual abuse, or who has information about it, to have the confidence to report it to us knowing that we will take it seriously, deal with it sensitively and investigate it thoroughly.”