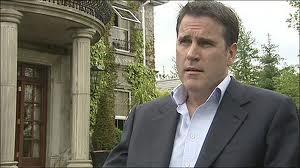 A businessman at the centre of a multi-million legal action with the Ulster Bank has told a judge: “This bank wants my head on a plate.”

Michael Taggart told the High Court on Monday that he had sacked his entire legal team last week because he and his brother John could no longer afford the spiraling costs.

And he asked for the case to be adjourned so that he and his brother could apply for legal aid to continue to fight the action.

However, if legal aid was refused, he told trial judge Mr Justice Tom Burgess that they intended to pursue the action as “personal litigants” – with he and his brother representing themselves.

The decision by the Taggart brothers to sack their legal rocked the Ulster Bank’s lawyers who were preparing to start a three week trial.

The Taggart brothers launched the legal challenge against the Ulster Bank after it cut its credit line in 2007.

They also want to know the whereabouts of £18 million in payments they made to the bank.

The Ulster Bank had vigorously opposed the Taggarts bid to have three cases heard together arguing it would be detrimental to the commercial life of Northern Ireland.

But a High Court judged ruled in favour of the Taggart brothers for a single hearing.

On Monday at the High Court in Belfast, Michael Taggart told the judge that he and his brother had funded the legal action for the past four years.

“This has consumed our lives for the past four years,” Mr Taggart told Mr Justice Burgess.

“This has got nothing to do with property developers….This is personal. This nothing short of putting our heads on a plate.”

Mr Taggart told the court: “I have three children under the age of five. I have got to do everything I can to protect their well being, their home and my home.

Mr Taggart’s former solicitor Kevin Downey told the court that, while a discussion about funding had taken place, he could not tell the court that the lack of funds was the reason the Taggarts had dismissed their legal team.

Stephen Shaw QC, for the Ulster Bank went further saying that Mr Taggart’s claim that he could not afford to proceed was “outrageous” and an insult to the judge’s intelligence.

He said that the document discovery exercise which Mr Taggart had found so expensive was very largely paid for by the bank.

“Again and again as the moment of reality approaches some stunt is pulled, some manoeurvre” he added.

These claims were rejected by both Mr Taggart and Mr Downey.

Mr Shaw urged the judge not to allow the application for legal aid, saying Mr Taggart could argue the case as a personal litigant after a few days’ delay.

The judge will rule on Tuesday morning at 9.45 am on whether to allow the application for legal aid.

He said: “This is not going away for any length of time, whatever happens.”