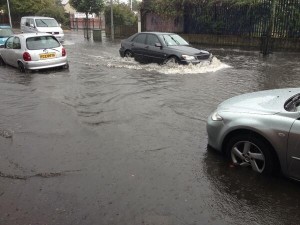 Flooding on the Shankill Road, west Belfast on Saturday afternoon

TORRENTIAL rain has caused major flooding in parts of Belfast on Saturday afternoon.

Weather men had issued a yellow warning of long periods of heavy rain.

Drains in Belfast have been unable to cope with the downpours.

The floods come as the Shankill Road prepares for a massive loyalist parade on Saturday afternoon for a UVF killer.

Around 72 loyalist bands are taking part in the annual Brian Robinson parade through the streets of the Shankill and Woodvale.

Robinson was a UVF hitman who was gunned down by undercover soldiers seconds after he shot dead Paddy McKenna over 20 years ago.


One Response to FLOODY HELL! HEAVY RAIN POURS DOWN THE SHANKILL ROAD