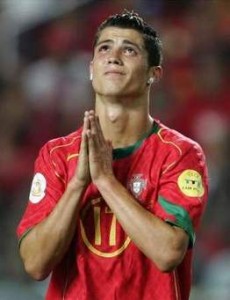 FANS trundled out of Windsor Park wet and bewildered on Friday night.

What should have been a famous, famous victory over Portugal – ranked No7 in the world – turned into a nightmare.

Leading 2-1 in the second with the Portuguese team on the back foot, the wheels came of the rampaging Northern Ireland band wagon.

First Chris Brunt was handed down a second yellow card and was given his marching orders at Windsor Park.

And then to add insult to injury substitute Kyle Lafferty committed a rash tackle and Northern Ireland were down to nine.

So the pendulum swung in the favour of Portugal.

During the first half, Northern Ireland fans were chanting at Ronaldo: ‘You are a cheap version of Gareth Bale’.

But come the second half, they started chanting ‘Mesi! Mesi! Mesi” after he scored a hat trick.

It was friendly banter but he proved why he is still one of the top footballers in the world.

And at the final whistle, when he walked off with the match ball, the fans appreciated his skills and applauded his five star performance.

In the first half it looked like it was going to be a dark night at Windsor Park after Bruno Alves scored the opening goal.

But Gareth McAuley rose above the Portuguese defence and fired in a header to give Northern Ireland a way back into the game.

The Windsor Park stadium started to rock in support of Michael O’Neill’s men.

However, Portugal lost the plot when Hilder Postiga head-butted Northern Ireland’s goal scorer and was given the red card.

And to make matters worse, Ronaldo was furious at the referee and got a yellow card for talking out of school.

In the second half, a Jamie Ward deflection gave Northern Ireland a well deserved lead against Ronaldo’s men.

Windsor Park was rocking again. Flares went off and the fans were in top voice.

And then the wheels came off. First Brunt headed to the changing room. Then Lafferty.

It left fans fuming that the pair were on the pitch in the first place after having been out of the 1-0 win over Russia.

And fans were even more perplexed when Lafferty came on for Niall McGinn.

It just wasn’t to be a famous night in the end.

The match will give manager Michael O’Neill much to ponder about before next Tuesday’s match in Luxembourg.