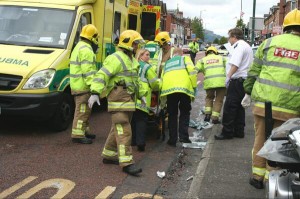 FOUR people cheated death on Thursday after being struck by a runaway car in east Belfast.

The midday accident happened after the driver of a silver Audi A4 saloon suffered a suspected heart at the wheel and lost control.

The Audi careered across the Woodstock Road ploughing into a woman driving a mobility scooter who was talking to two people at a Metrolink bus stop.

The car ended up smashing the front window of a charity shop.

Luckily the driver of the mobility scooter and and three pedestrians were not seriously injured.

Four paramedic crews at the scene rushed the injured to hospital.

The Woodstock and Cregagh Roads were closed while a police collision investigation unit examined the scene.

John McPoland of the NI Ambulance Service said: “When the crews arrived they found that the driver of the car had suffered some kind of cardiac episode and lost control of the car and veered onto the footpath.

“On the footpath there was a lady in a mobility scooter talking to two pedestrians. Unfortunately, the car ploughed into the three of them.

“It put one of the pedestrians through the shop front but he was able to get himself out of that.”

Witness Michael Chandler told reporters it was a frightening experience.

“It was the crash we heard first of all. It appears a car has come out of the road on the other side of the street and lost control,” he said.

“There are a lot of kids about and a lot of upset people who saw what happened exactly and know the people involved. it was quite scary to be honest.”