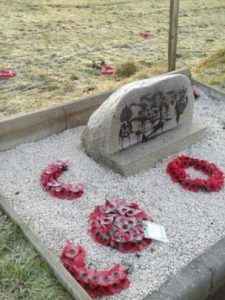 A MEMORIAL to three Scottish soldiers murdered by the IRA has been damaged in a sectarian attack.

Poppies were destroyed, stones hurled across the road a hammer used to take a large chip out of the memorial stone.

The memorial, is placed in a country lane at White Brae, Ligoniel, in north Belfast, was found attacked earlier on Wednesday.

The monument has been attacked before.

“It is appalling that the memorial has been attacked several times by Republicans since it was erected at White Brae in 2010, at the spot where the bodies of the three young Highland Fusiliers were found in 1971, having been lured to their deaths by the IRA.

“The circumstances of those ghastly and cowardly murders will always be remembered.

“This memorial was funded by public subscription through the Cavehill Oldpark Branch of the Royal British Legion and they will not allow it to be destroyed by the actions of sectarian vandals. Members of the soldiers’ families and former colleagues attend the annual service of remembrance and it is of comfort to them to know that their sacrifice is not forgotten.

“It is disgraceful that this memorial, on a quiet country lane, has been attacked once again with poppies destroyed and damage caused to the memorial stone.

“This will cause disgust among all right-thinking people. I appeal for calm and for anyone who can assist the police investigation into this and previous attacks to pass on whatever information they have to the PSNI,” he added.

Brothers John and Joseph McCaig from Ayr and Dougald McCaughey from Glasgow in Scotland (ages 17, 18 and 23) were privates serving with the 1st Battalion, The Royal Highland Fusiliers.